Located off HWY 15-501 in Southern Pines behind the Chick-fil-A restaurant. Established 1781.

The story of Kenneth Black is one of a tragic murder that brings the American Revolution home to Moore County.

Kenneth Black was a Scottish immigrant who settled in North Carolina around 1740. By 1775 Kenneth had become a prosperous farmer in the Southern Pines area, but the Revolutionary War was starting to rip apart his community. There were the revolutionaries, or patriots who yearned for freedom from the king of England. And there were the loyalists to the king, such as Kenneth Black, who were grateful to the king for his gift of land in North Carolina.

During this Revolutionary period, Kenneth Black was killed on July 20, 1781 in a swampy area near the Ray’s Mill Pond in Aberdeen an area that today is part of the Southern Pines Country Club.

On that day, Black hosted David Fanning, another Loyalist, at his home in Southern Pines. Fanning was on his way to Wilmington when his horse became lame. Black and Fanning switched horses and Black proceeded back home. A few minutes later, he was ambushed by patriot soldiers led by Colonel Alston, owner of the House in the Horseshoe. Black fell to the ground; he knew he was all but dead. They showed no mercy and went on torture and kill him – some of which was of mistaken identity and others because he was a loyalist. Upon hearing of Black’s murder, an enraged Fanning attacked Alston’s House in the Horseshoe as revenge. Every year this skirmish at the House in the Horseshoe is reenacted at the state site.

Kenneth’s body was taken back to his home and he was buried at the cemetery that we know today.

In the 1960s Tony Parker, a noted historian, visited the cemetery during his research on Moore County cemeteries. According to Tony, at that time all of the inscribed stones had been removed, and the wall was tumbled down. Then in 1992, modifications were made due to the property’s acquisition by Sandhills Golf. Since the remnant stone wall was located within an area to be used as a driving range, the fallen wall was reconstructed about 40 feet away and a memorial site was built. A large granite memorial to Kenneth Black at the new location, and a flat granite marker was placed flush with the ground at the original grave site.

Over the years the cemetery fell into more disrepair. Then in 2015 the Moore County Historical Association was approached by representative family agents, Bill and Nolan Moran, who periodically sought help from local media to protect the historic site. So, with the help of the Association volunteers, family descendants, friends, and Boy Scouts, the cemetery was restored. The land was cleared of brush, the stone walls were rebuilt, benches made, and the graves were marked with ground penetrating radar.

The Cemetery contains the graves of possibly 50 or more family members and others, dating from 1781 to the 1820s. The precise boundaries are uncertain but it is believed that most of the site is contained within a 0.30 acre area. It originally included a walled grave area of the immediate family as well as additional graves outside the wall. Many guests and family descendants visit the area, and most who were born in Moore County can attest they are related to the Scottish Black family clan.

2023 UPDATE
Over the last decade several developers proposed projects that would affect the undeveloped land surrounding the cemetery site. Then in 2020 Mid Atlantic Properties, a national developer specializing in large mixed-use projects, proposed a conceptual development plan that encompasses a 100-acre site for the area. The development was approved with the stipulation to preserve and enhance the cemetery. Thus the plans include the cemetery as a centerpiece feature with multi-user path, fences, and sidewalk crossing from the shopping center site. “Making the cemetery a focal point is really incredible. It deserves to be something that is celebrated. People will be able to sit there, and see it and learn about it,” said Mr. Silverman, a representative of Mid Atlantic Properties. 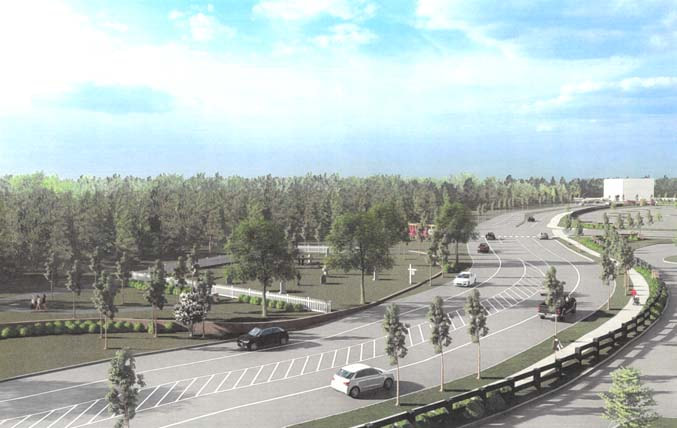 As development progresses, we will keep you informed as to its progress.